Mum guilt. It’s unavoidable and it starts the moment that tiny beautiful bundle is placed in your arms. If you don’t breastfeed you feel guilty. If you do, you still feel guilty because you’re depriving your partner of bonding time with his child. If you want to return to work you feel guilty about leaving your child in the care of another. If you’re a stay at home Mum you feel guilty about the days you haven’t indulged in creative and imaginative play and instead have watched Peppa Pig in your pyjamas.

It’s relentless and it’s inevitable. How can we not question the choices we make when we know that our decisions have an impact on the happiness and wellbeing of these little people who hold our hearts?

In June 2019 the media shared the results of a survey conducted by Sport England. The survey asked 1000 mothers of children aged 0-6 years about exercise and the results are exactly what I would have predicted. Over three quarters of those surveyed (77%) want to do more exercise – lack of time and cost were cited as the most common reasons for lack of physical activity.

But, the really worrying statistic is this one:  61% of the women surveyed said that exercising made them worry they were neglecting their responsibilities as a mother.

It’s no exaggeration to say that this terrifies me – and I’m probably better placed than most to comment.

I used to be morbidly obese. In 2015 my weight peaked at about 18.5 stone (to the best of my knowledge… I avoided the scales for a long time). I had my three children in quite quick succession and, after battling my weight for my entire adult life, I’d just given up trying. I had avoided exercise since I was a teenager and just walking my daughter the 400 metres to school left me breathless and sweaty.

I’d stopped feeling like me. I was only happy in my dressing gown, with the curtains closed, watching repeats of Friends and eating huge bars of chocolate. I told myself it was self care… it was the opposite.

In September 2015 I had a light bulb moment and realised that I had a responsibility to my girls to look after myself and treat my body with respect; carrying all that extra weight meant my back and knees hurt constantly but, perhaps more importantly than that, I realised just how lost I was.

Fast forward three years and I’m a marathoner. I now work in the fitness industry and I spend every spare moment I have trying to help and encourage people to become more active – particularly women and particularly Mums.

I can’t explain how important exercise is to both my physical and my mental health. The half hour I spend popping out for a run gives me a chance to unwind and concentrate on something other than the children; but more than that, exercise has made me realise what I am capable of if I work hard. Becoming a runner has made me understand how rewarding it is to set a big goal and work towards it day in, day out.

Not only am I happier because I have found something I love, but I am proud of the example I am setting for my girls. I want them to be active and remain active as they enter their teenage years. I hope that they will never face the same struggles that I did. Further research by Sport England has shown that teenagers are much more likely to be active if they have an active mother. We have much more influence over our children’s activity levels than their fathers do and we should be doing all we can to normalise exercise for Mums.

Before I wrote this post I asked my social media followers to let me know if they’d been affected by feelings of guilt about exercising and the answer was nearly always yes – and the responses came not only from Mums, from Dads too. Whilst many parents said that exercise makes them a happier person and therefore a better Mum or Dad, most acknowledged that this was offset against feeling guilty for missing bedtimes or time at the weekend when they felt they ‘should’ be with their children.

I can’t state strongly enough how important it is that we learn to treat exercise as a fundamental part of parenting. Not only because of the benefits to our own health and wellbeing, but also because we are in the grip of an obesity epidemic and it is our responsibility to do all we can to reverse it. 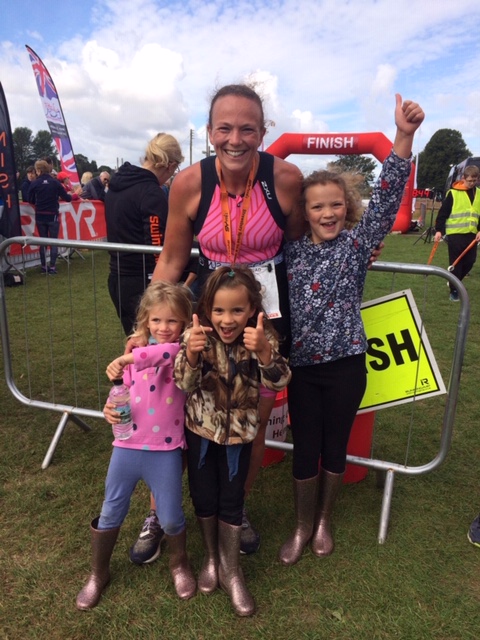 As a parent and as a chair of school governors, I spend a lot of time in schools and with children and it is blindingly obvious that not enough is being done. One of my followers is a PE teacher in a secondary school and she explained that many of her pupils can’t run 50 metres without walking or feeling out of breath. We can not possibly allow this to become the norm. As parents, it is this state of affairs that we should be feeling guilty about, not about the hour we take to pop to the gym or to go for a run.

Be active. Let your children see that you want to pull on your trainers at the end of a busy day and exercise for half an hour. Support your partner so that he or she can do the same. We have the power to positively impact the future health of the next generation. Be proud of the fact that you make time for exercise and do all you can to encourage and inspire others to do the same.